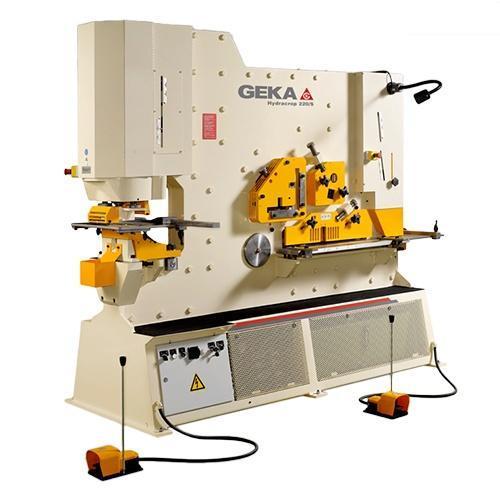 
The Geka Hydracrop 220/300 Universal Ironworker belongs to Geka’s line of Hydracrop two-cylinder hydraulic machines, able to be operated by two users at once. It offers the most punching power (240 US tons) out of all the models in the Hydracrop line.


The Hydracrop 220/300 Universal Ironworker is suitable for punching and shearing base plates for heavy metal construction.

It features five workstations for different tasks: punching, notching, shearing flat bars and cutting plates, shearing angles and section profiles. The stations in the universal ironworker may also be equipped with several Geka accessories and tools, largely increasing the versatility of the machine and making it an option for a wide range of metalworking jobs.

Features and specifications of the Geka Hydracrop 220/300 Universal Ironworker

There are no files attached to this listing currently. If you Have any further questions regarding this listing, please contact us for more information.

Blumberg Machinery is proud to offer a slew of services from appraisals, financing, auction services, and more.